A wanker driving an white e-van is still a wanker

In the Empire of the Car, pollution is one thing that threatens the car companies -as it puts them on a par with tobacco companies, and lines them up for being banned from cities. If that happens, a key feature of the motor car "you need it to get around" goes up in flames. They would lose the cities and be left with the long journeys. And as only a fraction of journeys are the long ones, there'd be a lot less cars on the road.  No school running parents, no bored commuters on the M32 -and no people buying cars and having them serviced.

This is why e-vehicles get so much hype. The car industry can't be so fucking naive to realise that it addresses all the problems of cars and how they are destroying our cities -but they can promise it, to say "we do care, things will be better -now go and buy that Urban SUV for the school run because your last car is five years old and doesn't have an ipod socket or reversing camera." They can go to the politicians and say "we can solve the cities' problems, give us: money, per-car subsidy, C-zone exemption, car-tax exemption, free parking, the right to drive down bus-lanes, free charging points, and so on. The politicans may so fucking naive that they do believe this -they certainly give out more fucking cash per e-car than you get on a bike to work scheme, and they so love to turn up at the car factories in Swindon, Oxford and Newcastle to get their fat faces in the local rags saying "we politicians care about the environment and about jobs in the area -vote for us". Bike to work schemes, custom framebuilders and the like just don't make for these press events -and they don't have the lobbying skills either. Which is why the money goes to e-cars and not fixing our cities.

Which means that the cities will carry on being shit for cycling and walking.


White van wankers are the front line in the war against the cyclist, the ones who hate bicycles and go out of their way to "show them who owns the road", "teach them a lesson" and generally vomit abuse at anyone on a bicycle.

They also park where they fucking like, whether that's a bike lane, bike path, pavement or anywhere else that is close enough to their destination that they don't need to walk.

Does anyone really think that moving to e-vans will make these fuckwits pleasant to share roadspace with? If you do, you're a naive idiot. 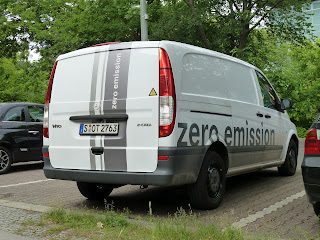 They will be just as aggressive, hate bicycles just as much, only now not be able to drive six inches behind your bike over-revving the diesel engine. Maybe also slower off the mark when the lights change. They will still park where they want to, still scream hate, still have passengers who lean out the side window and swear at you (you not had that? Come visit Yate). They will still think a cyclist coming down a contraflow should not be there and swerve over to clip you.