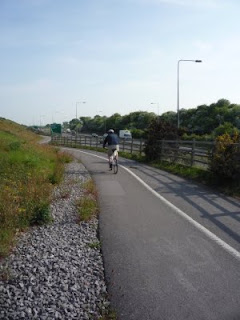 S. Gloucs Road planners: We want a shrubbery. Yours.

Rather than slag off the council cycle team, let's look a bigger problem: the council road planning team. These are people whose daily commute probably takes in the A38/M5/M4 exchange, the M32/M4 exchange and the A4174 ring road. While everyone else is stuck in their cars thinking "this is shite", the road planners are thinking "we love complex interchanges. If we added seventeen more flyovers we could get another 1500 cars/hour through here"

These are the real enemy. The cycle team can only fuck up cycle lanes and the bits by the roads. It is the road planners that put in the dual carriageways and the roundabouts off them -then get surprised that this creates more congestion.

Whoever these people are, they are lost in 1970s road planning, ignorant of demand creation. They think widening the ring road will solve problems -it won't. What would solve problems would be making it safe and easy for people to cycle to work, to school and home. Dirt cheap and easy.

But the ring-road planners don't want that. They want to do motorways! Flyovers! Bridges! They are civil engineers building things without any grounding in what actually benefits the area.

This week -an expansion of the A4174/BAe roundabout. Where will the space for this come from? The elm-green park area alongside the Filton Pool and community centre. This has a BMX track, a cycle speedway (there's a waste of cycle sport money), and one of the few green spaces in the area.

The road planners want this. They don't have the money for it, so they've asked Filton Council to give them to it -for free!

In a letter to the council, Mark Shearman, principal engineer for transport services, says they want 317 square metres of extra land to widen the Filton A4174 ring road, as part of the Southmead 106 funding project, which it asks Filton council to donate free of charge. The move would see the amount of land taken from Elm Park playing fields, reducing the size removing trees, pathway and shrubbery in the process.


Extra space for more ring road over parkland. Nice to see the priorities. They say this will reduce congestion, but that shows how little they know of "induced demand" -more lanes for cars means more cars.

What about the people who cycle? Fuck off, is what the road planners say, discreetly:

See that? "want to" but "limited budget" and "timescale pressure". That means no. It means "we don't give a fuck about bicycles and can't be arsed to do anything about it". It means "All that stuff about putting walking, cycling and public transport first? That's bollocks that we don't believe". Induced Demand? Unproven theory. Global Warming? A communist conspiracy. Peak Oil. Fictional. As for cycling? Why do that when there is a car park by our office for our BMWs?

This is the root cause of the shitness in the area for cycling. A bunch of road planners who dream of a Filton of Flyovers, who ignore the larger consequences of their decisions. Maybe they do know of Induced Demand -and like it, because it keeps them busy building flyovers and roundabouts.

Is that surprising? The traffic department views cyclists as a bunch of whiners who turn up to a meeting that they don't attend themselves.

If there is one good thing, the outcome of the meeting was

That may give them the time to actually design in that bike lane, a proper one. They could even use the money saved from the widening to build it. But you can pretty fucking confident they won't as the road planners don't believe in bicycles.

And where is our cycling representative, Bwian Allinson in all this? Keeping his head down, by the look of things.