DfT's "Pennies for Cycling" campaign —you can help!

The DfT has just invited eight cities to bid for £6.5M for cycling.

That's less than one roundabout widening on a £500M project to uprate a single trunk trunk road. Consider that: one road gets 77 times the entirety of England's cycling funding. No "inviting eight roundabouts to bid for the money", no councils having six weeks for the bit, no ministers doing press conferences, the council teams scrambling to get their designs of roundabouts in by late march, hoping that by getting their roundabout they would be one step closer to having a wider road.

It doesn't work like that, because the DfT knows that such a mechanism is utter bollocks.

To do it for cycling is taking the piss.

Why do it then?

Because they have failed to provide anything other than 10p/head for cycling, and are now trying to exaggerate its size by focusing on a few cities, offering one or two of these a few pounds, instead of posting a small check to every council. After all, for rural areas, the cost of the postage alone would be more than the grant.

Having it a bid process means that even more than two or three cities can feel part of the process, which allows the minister to do press events around more of the country, pretending that the DfT gives a fuck about bikes. They don't, as can be seen by their proposal to ban cycling from the A63,  There its either "We can't be bothered to provide safe cycling infrastructure" or, "we only have £1.72 for cycling here, so lets' spend it on a ban".

The entire department is taking the piss, the minister standing up trying to keep a straight face while giving out roughly the same amount as the queen gives out every easter. That's a time honoured tradition, which, when you think about it, is exactly what Jesse Norman is dong: a minister from the government giving out a pittance to people who are expected to be grateful

The People's Cycling Front of South Gloucestershire will not be involved in the bid process.

Instead we have chosen to contribute to this campaign by posting in three pence. 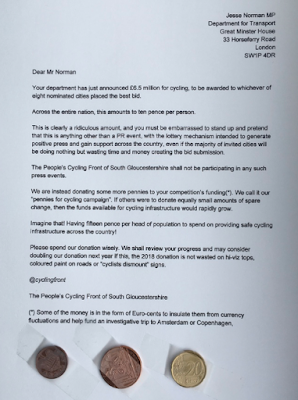 If every cycling campaign and activist posted in a similar amount, soon the DfT would be able to increase the amount they give out to councils, maybe even by two or three pounds! And if not, well, the fact that we are posting in more cash than the department is spending on cycling per head may make it clear that everyone recognises that the department is taking the piss.

It also gives web sites and journalists who cover cycling a new question to ask Jesse Norman whenever they next encounter him at one of these events, "how much extra funding for your campaign was posted in in the form of pennies sellotaped to letters?"

If you contribute to the Pennies for Cycling Campaign organised by the DfT, please let @cyclingfront know with a link to or photograph of the letter. We wish to track how successful this fundraising strategy is, and see whether it is a viable alternative to long-term funding of cycling infrastructure with minimum design standards and a spending per head measured in double-digits of pounds rather than single pennies.

Here is our template response, to get people started.

Note: after the letter was composed, people informed us that the funding/head was 10p/head. The text here is consistent with that value, and the letter covering the donation also corrected, and €0.20 stuck on to fund a trip to Amsterdam or Copenhagen

Posted by People's Cycling Front of South Gloucestershire at 12:48 No comments: