The S Gloucs problem: the attitude to cyclists

During the the Bristol "crumbs to cyclists" event, praise was directed to the BB Railway Path: the jewel in the sustrans crown. In strava, a burning line between Bristol and Bath.

What nobody said was that the RP is now closed until march and that nearby residents are sabotaging cyclists detouring the closure. As that is what is happening.

A road bridge is closed for repairs. This was meant to be for 12 weeks, but now the signs say 32 weeks. 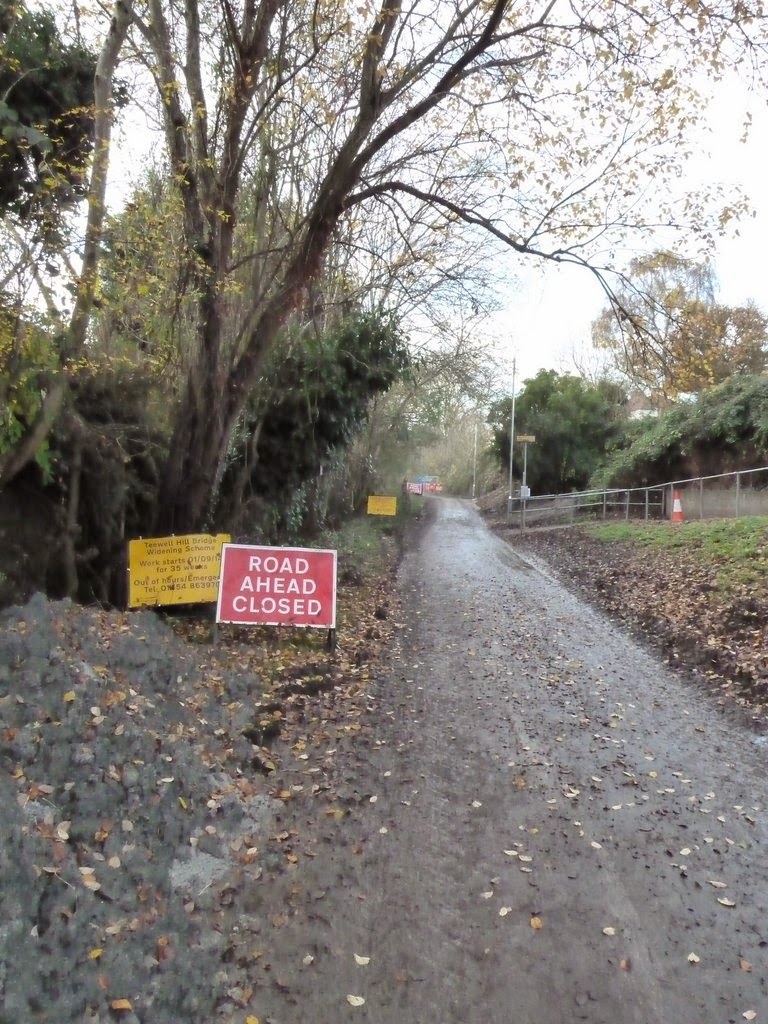 The cyclists? They get to detour onto roads where cycling is so unusual that they have to put up signs saying "cyclists on the road". Think about that: a warning that there may be cyclists. 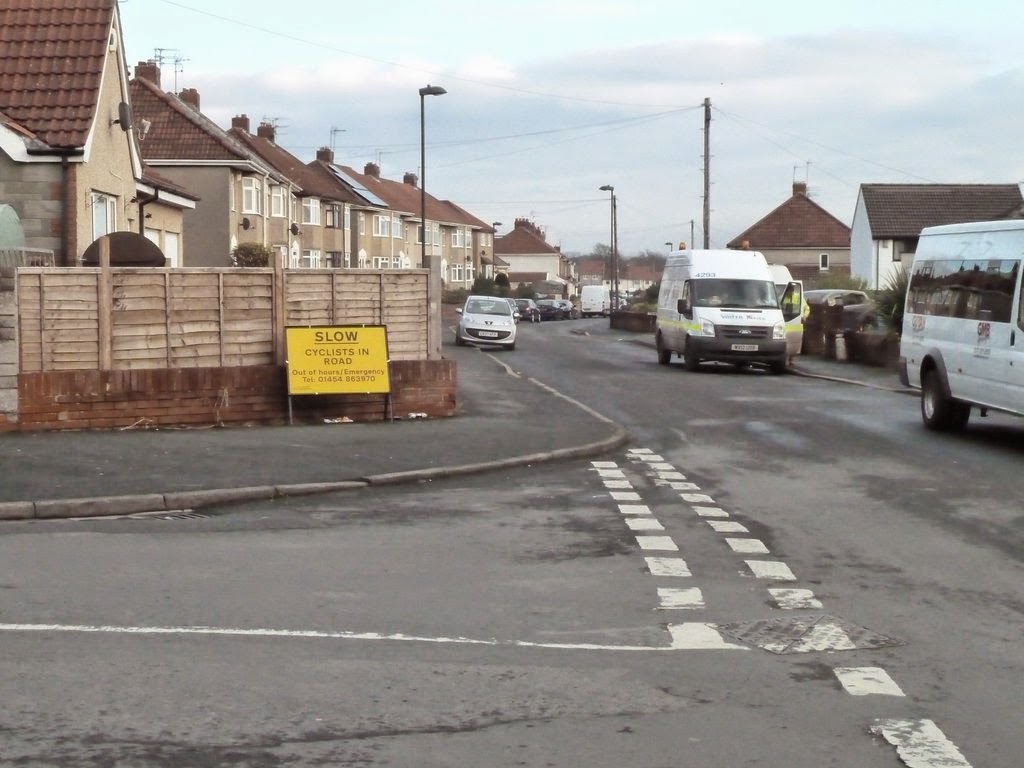 This is near two schools, on roads so narrow that half the cars have to park on the pavement, yet roads a few hundred metres from the Railway Path. There's nary a sign on these roads saying "cycle to Bristol, 30 minutes". Some temporary diversion signs have been put up,  but for the permanent residents there's been no attempt to show them that there is an alternative route to the city that doesn't involve traffic jams, parking problems, waiting at lights and generally having a miserable journey.

As a result, the locals appear to live a miserable life completely isolated from cycling —and viewing cyclists as intruders on "their streets".

We know this because some of the people are putting down tacks on the detour. This isn't somewhere in the New Forest where a 1000 riders on a sportive are a threat to rural calm. This is an alleyway in one of the UK's showcase "Cycling Cities". 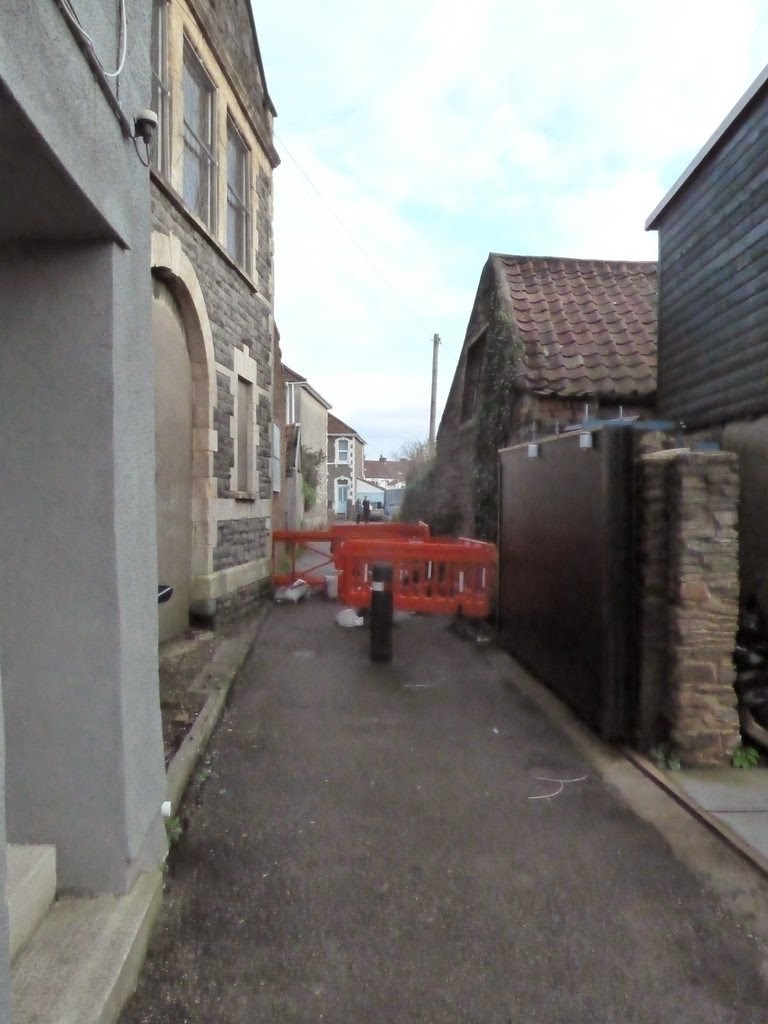 The original detour sent cyclists through this little alleyway. Only it turns out that this isn't "an adopted road", and cyclists are effectively trespassing. The locals, instead of not giving a fuck, or even using the route themselves, started off shouting at cyclists, and have now resorted to putting down tacks on the path.

The council? No attempt at negotiating a settlement -a carrot like getting the roadworks team to pay some compensation, or threatening them with change "we will adopt this road", or a bigger stick "anyone putting down tacks will be prosecuted".

Instead: a sign asking cyclists not to go down it, some temporary plastic barriers held in place with sandbags, and an extended detour pushing cyclists onto the main road. 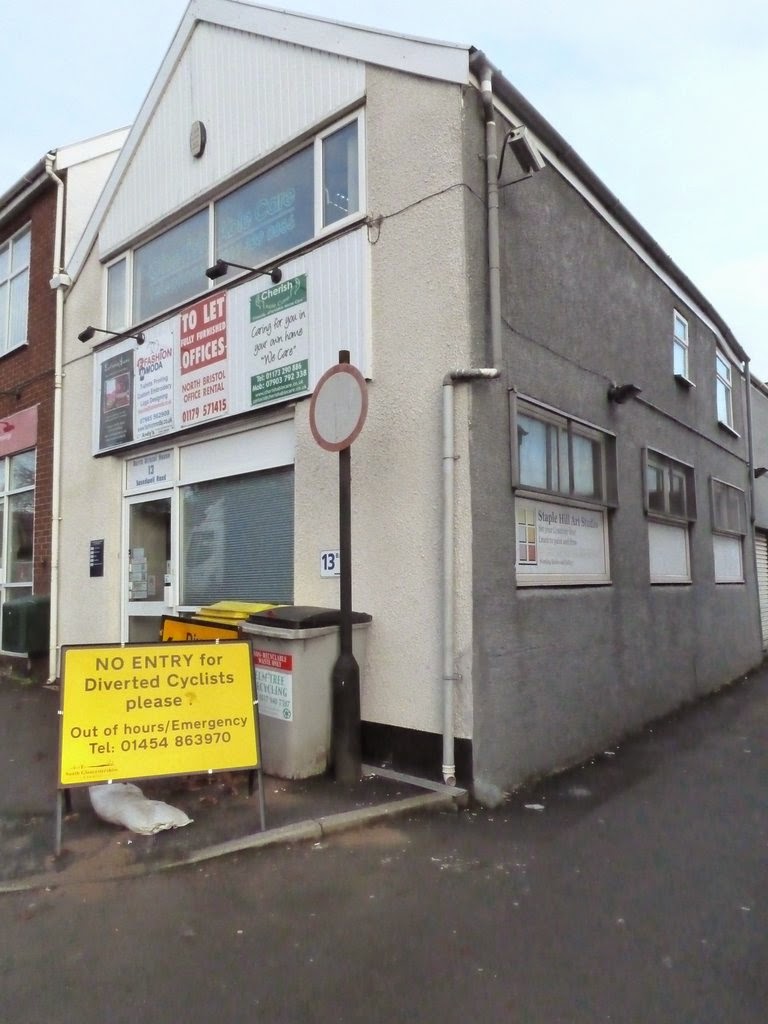 That's the road at the the lights, past the queue of HGVs. 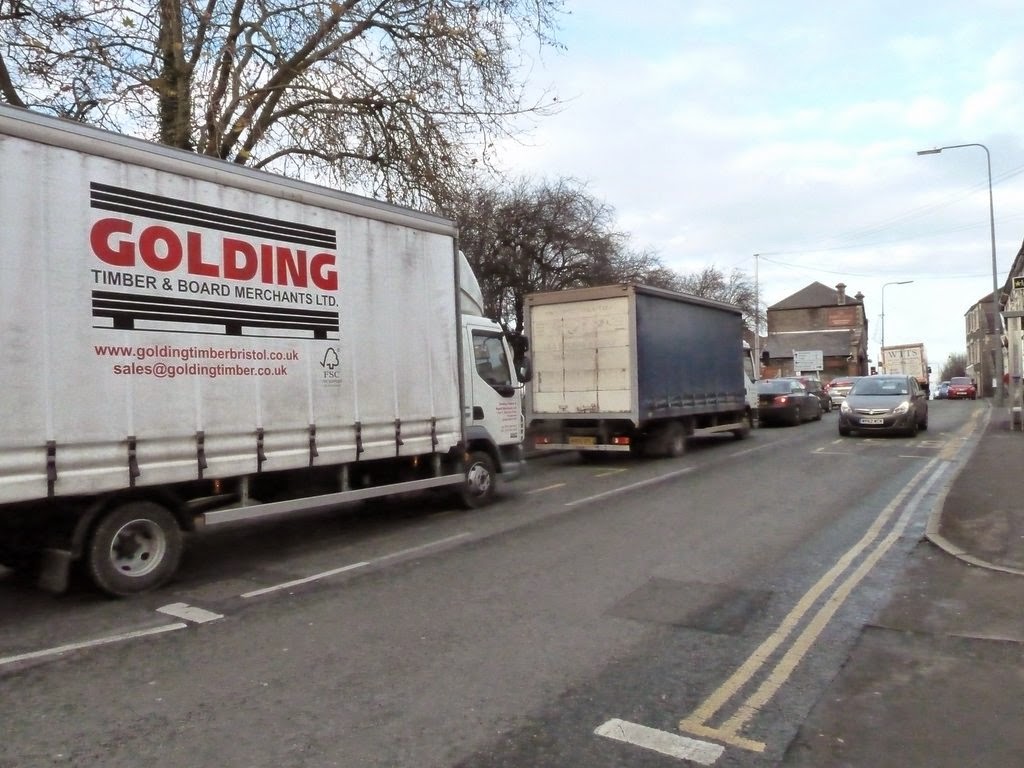 Any cyclist with a hint of self preservation is going to continue to use the alley —which is exactly what is happening. And the locals? They've been putting the tacks down and then brushing the sand from the sandbags on top of them.

This shows the clash of cultures in Britain's "Cycling cities". In the core, you have the people who walk and cycle. In the suburbs, you have people who hate cyclists so much they are prepared to attack them for having the arrogance to want to use a minor alleyway through a dull suburb. This clash of cultures isn't good for anyone trying to cycle through the city, and it isn't good long term. These are the Crews Hole campaigners who would rather be a rat run than a safe walking or cycling route to school. These are the people who resent a few crumbs being thrown at cyclists, and appreciate the £15B of pollution-creation announced list week in the mistaken belief that it will solve any problem other than the balance sheet of construction firms.

These are the fuckwits that think those parking tickets they get are a fund raising conspiracy by councils, that CCTV bus lane and parking enforcement is cash-creation, that Eric Pickles is talking common sense. These are the fuckwits who drive to the shops round the corner for a pack of cigarettes, get a ticket and then whine.

And the council, here in the S Gloucs part of Bristol, what the fuck do they do? A few detour signs and a "cyclists please don't use this alley" sign. Not even a cyclists dismount, which would actually be progressive. Just a cyclists "fuck off onto the main road"

What could they do? There's the carrot of cash, the stick of enforcement, the threat of worse "after we adopt it we can make it a through route to cars too".

More critically, address the conflict by getting the fat-arsed locals out of their cars and on their feeet. They could start to sign up the links from the RP to the shopping streets, stick leaflets through the doors encouraging people to find the path and use it to get into town —or at least as far as Fishponds. But no, this is not Bristol city Council we are talking about, this is S Gloucs council —and S Gloucs Council don't care about cyclists.

This actually shows one good thing about the selective funding of those crumbs for the cyclists. By directing it to a few cities that are actually making some attempt to improve cycling, with engineering teams that can actually do something —and most critically, with a political leadership willing to inconvenience drivers to make their towns and cities a better place to live and work.

Because if not, those crumbs will get frittered away in places like S Gloucs —or worse, Brent.
Posted by People's Cycling Front of South Gloucestershire at 08:34 2 comments:

Thursday and the politicians meet in central Bristol to announce a couple of hundred million for improving UK cycling over a few years —no guaranteed of continued funding, and such a pittance that it has to be focused on a few towns to show any sign of delivering anything useful 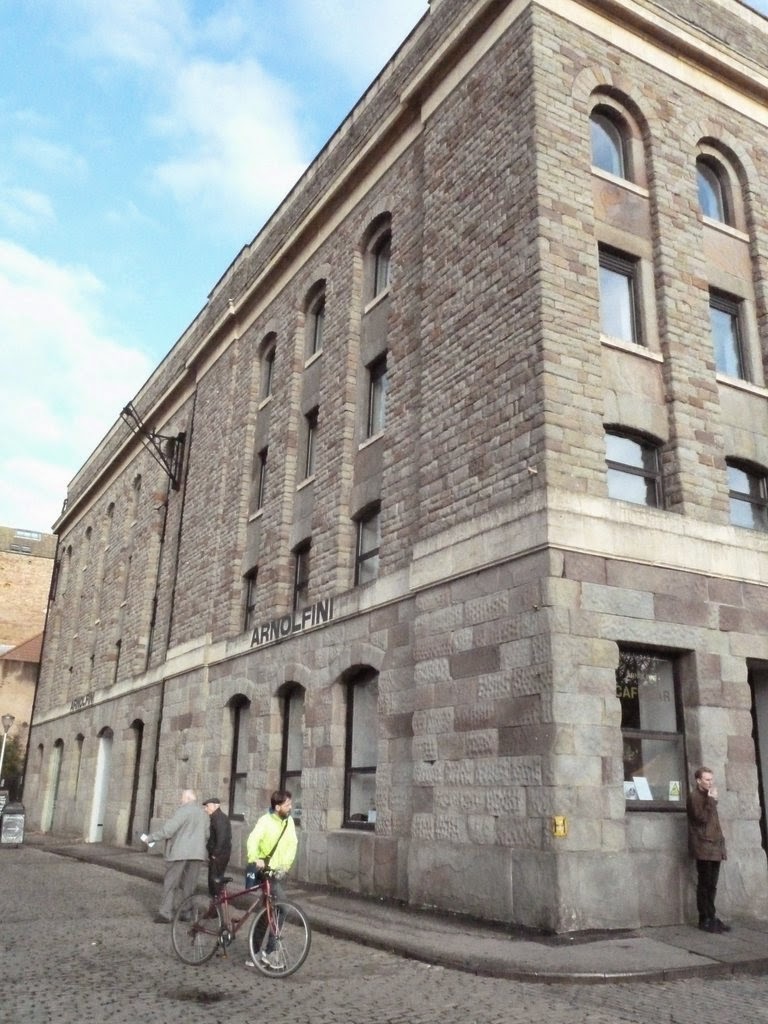 This is the meeting going on, behind the cyclist in the hi-viz and the man smoking 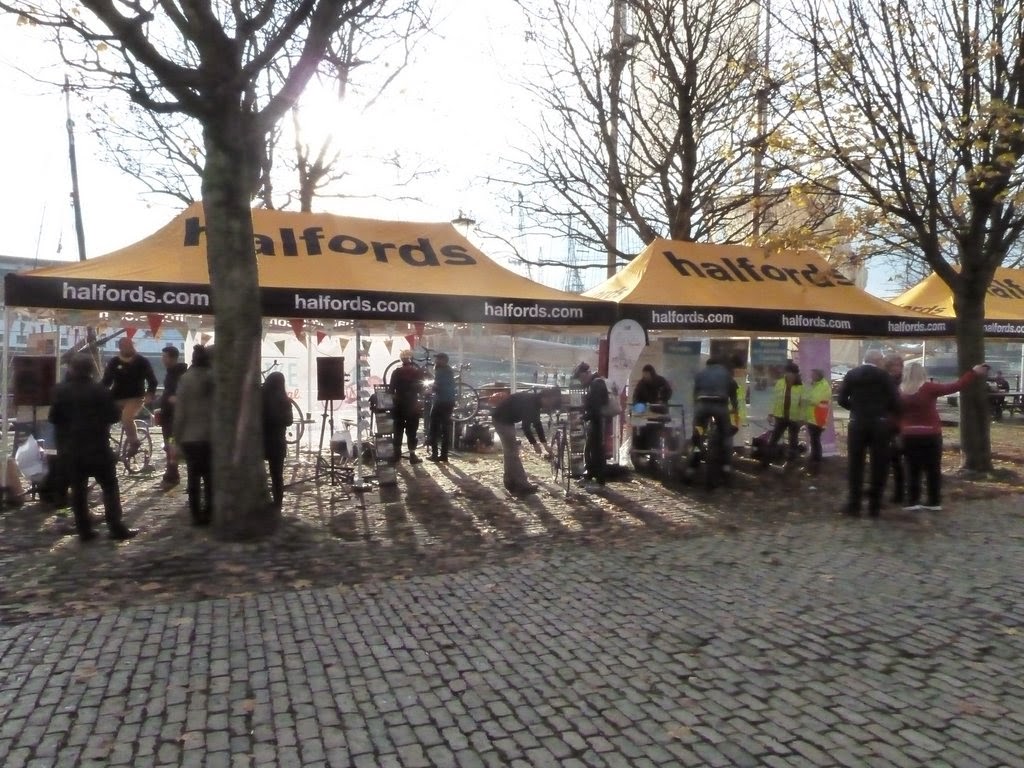 Turn 180 degrees and you see the cycling-in-Bristol bit of the council —all wearing hi-viz themselves. If even the council can't say it's safe to cycle unless you dress up like a christmas tree, then it's not safe to cycle.

And four days later: same politicians get up and show where their promised billions will be wasted. Billions. So that people from London will have the traffic jams on their drive to Devon moved a bit. So that people trying to get on or off a motorway in the north of England will have to weight slightly less. At first, anyway. The S/W of england want that widened A303 precisely because they want the traffic generation. It doesn't matter to them if the existing holidaymakers have to wait 30 minutes on a friday; they want more visitors. The alternative —a good electric train service via Bristol— doesn't get a look in.

That £15B announcement puts the crumbs of Bristol into perspective: a pittance to retain votes in a few cities where the green candidates threaten the libdems. £200M is all the libdem coalition partners could get out of Osborne, enough for their candidates to claim to care come election day. Well, now for those people in the city who have the campaigners come to their door in Stephen Williams's constituency have an answer: how can you promise £15B to road building within four days of £200M for cycling and keep a straight face.
Posted by People's Cycling Front of South Gloucestershire at 08:33 No comments: