The school run: Fiat telling the dads to get an SUV

in 1970s, the NL had their "stop the Kindermoord" campaign.

In 2013, what does the UK get? Fiat trying to sell a micro-SUV on the fiat 500 chassis, advocating "city brake control" traction control on their cars "so you can get home safely" 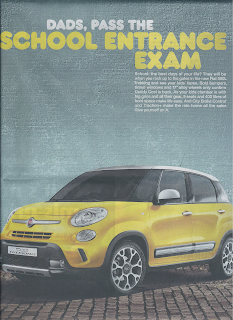 Think about that. The main contribution Fiat thinks can be done for child safety is to make it easier to drive you children to school and back on snowy days.

The main thing Fiat say that you, the father, can do for your children is drive them to school and back in a shiny new car. That your children will be so excited by tinted windows and alloy wheels that they will be pleased to see you. And that your status amongst school parents ('daddy cool' and 'rock up to the gates').

There's a message here: whatever car you are picking the kids up today is boring and unsafe, your children will think you are uncool, and all the other parents will look down on you.

There's another implicit message, one they probably didn't even think of: that you never, ever, walk or cycle your children to school. Instead you "rock up to the gates" -legally or not. That if your old car, without city braking and traction control isn't safe -just think how even less safe it would be if you walked with them to school -or even let them walk on their own.

What the can be done about fighting the millions that get spent in marketing SUVs like this for the school run? Even if papers occasionally write pro-everyday-cycling articles, colour pages are dedicated in every edition saying "drive your kids to school" and "get a new SUV or your own kids will look down on you"

School engagement would be ideal: imposing a walk-zone round the entrance so you cant "rock up to the gates", but instead have to drop the kids off 500 yards away and walk them in.
That would be ideal. Unrealistic? Maybe, but it happens sometimes in France. And if some UK schools adopt, then it sets an example for others.

The other tactic: create the social norms that walking and cycling to school is the way to do it. Niceway-style "cycle them to school so your ponies grow up to be healthy horses" isn't going to cut it, but if there a MAMIL group growing up at the school, pull them in: get them to do dropoff by bike before the morning ride, -even if that ride is just the commute. Make it social event with the kids going in with their friends. Maybe persuade the school to do more to reward the kids than give them stickers on a card in walk-to-school week.

Posted by People's Cycling Front of South Gloucestershire at 11:36 1 comment:

The RAC foundation have just published a document on costs of fuel.

First, its a PDF file, which shows they are still in a world where they expect people to "print" things before reading them. Quaint and rapidly becoming irrelevant. Maybe its something they expect to print themselves and hand out. But to whom? Because even the politicians will have iPads where they read news on their first class jollies in to London -and PDFs look even worse on a tablet than they do on a laptop or desktop. Whoever their target audience is, it's well, some relic of the past.

Second, it claims that cars are buses

To all intents and purposes cars are public
transport: they carry most members of
the public, most of the time

That's even though they own up that to the people with the least amount of money don't have cars, don't suffer from petrol poverty

100% of the people in the lower quintile have houses to heat, gas bills to pay, electricity bills to clear. If someone who cares about that lower 20% of income's energy poverty, addressing the cost of heating and lighting houses benefits 100% of that group, whereas any change in petrol and diesel pricing is most significant those people who drive a lot -business who can offset it against tax, and people with big-engined cars who drive a lot.

Finally, and this is where it gets to its most ridiculous, it pretends bicycles don't exist.


Number of journeys by car
Of all the trips made in Great Britain:
78% of distance travelled by all modes, including walking, is as a car driver or passenger.
Source: DfT National Travel Survey NTS0301, NTS0302

They get the text of those links wrong, but the links themselves to NTS0901 and NTS0303 are valid DfT surveys.

Except what happens if you add the numbers?

The numbers the RAC Foundation give don't add up to 100%. Four percent left over? An error? In a paper that is focused on percentages and numbers? Perhaps there's been a mistake and one of the numbers is mistyped, the way the links were?

Time to look at the data, the excel spreadsheet the Dft serve up, with a ready-to-paste chart. 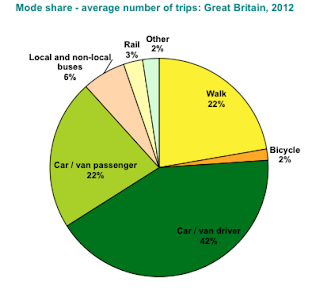 The RAC foundation seem to be hoping that bicycles will go away, that all will return to pre-1973-land, where petrol was dirt cheap and every city was going to be rebuilt the way Leeds was.

Which puts them in very limited company

The first two are the Kingdom of the Swivel Eyed Fuckwits -a lost cause not worth worrying about, except when other fuckwits like Pickles try to come up with policies that divert bottom-feeding Daily Mail commenters to his party and not the UKIP party.

The other two are trouble -especially with lobby groups like the RAC foundation.

Here we have it then, now its apparent why the document is PDF formatted -it was designed for: handouts at the upcoming party conferences, something they can give away at their lobbying booths trying to make the case that fuel costs are too high and that "something must be done". That something isn't HS2, more likely fracking.

But their lobbying doesn't include that 2% of bicycles: it really is pretending they don't exist.

Which is why everyone should ask them a simple question: why so scared?
Posted by People's Cycling Front of South Gloucestershire at 21:53 1 comment:

Email ThisBlogThis!Share to TwitterShare to FacebookShare to Pinterest
Labels: RAC

The RAC foundation seems to be drifting more and more off tangent. For a "research" organisation, well, their blog post seems like a daily mail content generator.

Today, Should cycling money come from road or rail funds?

Here it picks on the fact that Maria Eagle, Shadow Transport Secretary, called for a proportion of the UK road budget to be spent on cycling infrastructure, and calls it out:

Ms Eagle talks only about diverting funding for roads to boost cycling infrastructure.

See that? The RAC foundation has just come out and declared that none of the billions spent on roads should be spent on bicycles. Instead they question whether HS-2 should be it.

Well, the HS2 economics are bogus, and as the RAC note, you could get everyone in the UK a bicycle and have lots of spare change -£36B to be precise, which would come in handy making it safe to cycle.

Yet why does the RAC seem to be resisting spending money on infrastructure to make it safe to cycle? Is that meant to be completely separate from the many bypasses and roundabouts being built from the £28B spending spree?

Because if they do think that cycling should come out of a separate budget than roads, then why do pedestrians get pavements in most road developments? Why isn't the RAC bemoaning the fact that pavements and zebra crossings come out of the "road budget" and not something else?

The answer is obvious: if the RAC said that HS2 should fund pavements rather than the road budget, everyone would laugh at them. Yet here they seem unable to accept or recognise that bicycles are a legitimate form of transport, and that the money spent on the UK road infrastructure should accomodate them.

The daftest bit is when they come over all defensive and say "is the demand there?".


Another thought, of course, is whether there is or is not the significant latent demand for cycling infrastructure that the suggestion of much more spending on cycling implies. Here, a recently Parliamentary written answer suggested that nationwide only a tiny fraction of journeys are undertaken by bike, and that this is not expected to change significantly for at least a couple of decades, which suggests that spending lots of money on cycling infrastructure is not a good idea.

That parliamentary question is flawed in that it compares #of miles per transport, not no. of journeys, so the long-haul drives would skew the figures. If you look at short-distance journeys the percentage, while atrocious, is less so: we are seeing about 10% of adults cycling per month (again, bogus numbers, but a different way to look at them).

So here's a proposal to the RAC. Why not give the cyclists the exact fraction of the road budget that reflects their use in a region? In central London, that would mean 25% of the spend; in central bristol, probably 10-15%. Spend that money to make cycling safe and a virtuous cycle would kick in: more people cycle, more cycling budget. Eventually it would even propagate to places like S. Gloucs.

Posted by People's Cycling Front of South Gloucestershire at 14:57 2 comments: