CTC: who do they represent these days?

This is not a critique of the CTC membership, nor of their magazine. It is a denunciation of their political approach.

So far this month we have


Given the CTC claims to represent cycling in Britain -and it is the organisation with the largest membership- it need to look hard at its actions and rethink them. In particular, it needs to stop thinking about the needs of its members -a niche group in a minority activity- and think of the needs of the cities -what will transform them without waiting for the cars to go away.

That comes down to quality infrastructure, which comes down to a government providing serious funding and the technical guidance needed for it. Which they are not going to do with the current DfT policy -so "welcoming" is a complete waste of time.

The CTC needs to stop with the politeness, and come out with condemnation that makes headlines. The ABD do it after all, and they are three people who won't even let their dog join.

It's too late for the CTC to re-issue a press release on the DfT report -but not too late for them to have a a harder hitting one ready for any unsatisfactory outcome from next weeks debate. Get the quotes ready from the vocal campaigners -including hembrow, get the the plans ready to double up the campaigning, not be fobbed off with DfT "nothing we can do" toilet-paper-grade reports.

And, the same week, publicly withdraw support for the niceway code on the basis that it is a victim blaming failure.

There is no time to be wasted trying to politely hint that things could be better: that has been tried for 40 years and done nothing whatsoever.

Posted by People's Cycling Front of South Gloucestershire at 21:05 8 comments:


A lot of the arguments in favour of cycling are based on health, cost -it will save the NHS billions, and congestion: nobody has any other solution.

These arguments make sense to anyone who looks at the figures.

Except we have a government that doesn't give a fuck about scientific arguments.

This weeks badger cull is an example: the scientists say it won't work and be a waste of money, but it is going ahead. Why? To keep the NFL and rural tories happy.

Those billions of new roads. No, they don't make sense, but the DfT doesn't care. It wants the money, the politicians the headlines.

Then there is Fuckwit Pickles. His proposal effectively abolishes double yellow lines, would make driving worse though congestion, and, once the corner shop is surrounded by illegally parked cars, not even let you park near the shops. Yet the fuckwit -and remember this is a fuckwit who claimed for a second home as 37 miles was too long a commute- thinks double yellows should go.

Now we have "speed bumps will save the cities from online shopping". This is so bollocks its clear that Fuckwit Pickle just doesn't like speedbumps and is trying to justify it. Except: online shopping has been hurting out of town stores more -look at the John Lewis results showing reduced sales out of town malls as fuel costs increase. Paying to drive for half an hour each way to wander round a featureless mall? Shop online and pay less? All shops need a reason to be compelling, and speed bumps are not it.

The government is clearly anti-science, anti-evidence. Instead: headline grabbing measures that Daily Mail commenters like. Because those are the voters being fought over; the swivel eyed loons who don't want data, talk about "common sense" instead. Loons who only demand -then discount- data when it's bad news, like global warming.

This creates a problem for cycle campaigning: we can't expect economic or health arguments to win, not when the politicians and the swivel eyed view cycling as a hobby for eco warriors -not a realistic option for themselves.

Somehow we need to get the Daily Mail on our side, so the swivel eyed will follow - and then, perhaps, the politicians.
Posted by People's Cycling Front of South Gloucestershire at 20:49 No comments:

Nicewaycode : wake up, time to die.


Introducing a new law for the Internet

Hembrow's Law: whoever cites Franklin in a debate about cycling loses.


This week the losers citing Franklin are @nicewaycode trying to defend their bus ad:

Cyclecraft author John Franklin is strongly in favour of overtakes on the right unless the nearside lane is free of traffic in a multiple lane situation. 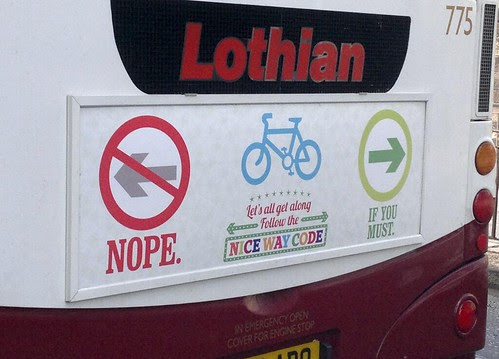 The correct riposte to anyone who cites Franklin is: so fucking what?

Franklin criticises dedicated cycling infrastructure and claims that having it makes the Dutch lazy. Yet the fact they have that  infrastructure means that they can get to and from their destinations alive, irrespective of age or skill. By denouncing infrastructure and advocating taking the lane, Franklin has got the UK into a situation where about one cyclist a week is dying, yet all the Scottish government is prepared to is divert some of the tiny amount of money dedicated to cycling into an advertising campaign that says, essentially, "do not use what shit pieces of paint we've put in so as to claim that we are cycling friendly -as that  will only kill you" 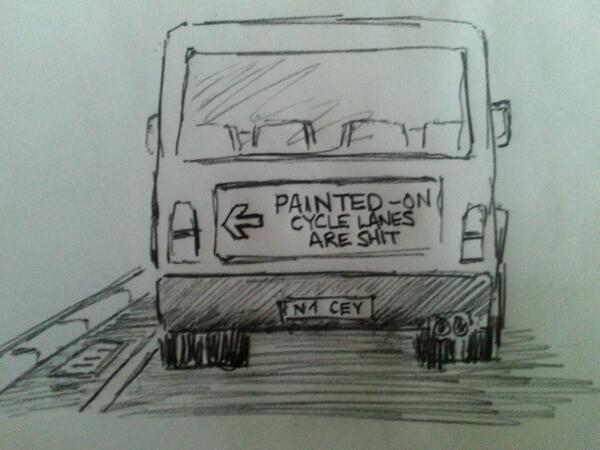 They have a point: the red-paint routes are shit. The showcase South Causeway cycle route is shit. What is proposed in Leith Walk is an even bigger pile of poo as they are actually spending money on road redesign there -but still producing something shit where there is space for it.

The nicewaycode people are just victim-blaming cyclists for even imagining that the shitness provided across Scotland for them is safe to use.

That "don't go up the left" advert is reflecting what campaigners like pedal on parliament are saying: what we've been given today is shite. The other sign, "maybe", means "maybe if you are fit and brave you could cycle in the traffic"

Which summarises the problem of cycling in Scotland. Except the niceway code fuckwits are just repeating a fact to cyclists, cyclist who, unless this is the first 15 minutes of a bike ride in Britain they will know: cyclists are not welcome.

These bus signs are the cycling equivalent of the Home Office "immigrants go home" racist vans. Here they are instead sticking buses in the bus lanes that cyclists are forced to use as they are the least unsafe par of a road, with a sign on the buses saying "cyclists: fuck off to the Netherlands".

Why are they doing this? Because the MSP with responsibility for cycling doesn't seem able or willing to make cycling a safe transport option in the country, and he lives in the imaginary Franklin Land where he, Franklin and the nicewaycode team can pretend that cyclists will live if they take the centre of a lane, don't run lights, and instead pretend that they are a horse.

Keith Brown, MSP has passed the poisoned chalice to the niceway code agency, with a brief "stop the cyclists running red lights and maybe wankers with a history of killing cyclists won't kill another one then get a light slap on the wrist as a penalty"

Those naive fools took the bait -and so are getting vilified and ridiculed for producing what will go down in history as the "what not to do" example for any road safety campaign;  an example whose YouTube videos will be watched and laughed at by media studies students in future courses on the effective use of social media.

Here is the message of the cycling front to the niceway code: stop it before you make things even worse.

Go back to the minister and say "we are spending cycling money telling cyclists to not use the shit you build for them". Say "cyclists ride on pavements as you have provided nowhere else safe for them -and an advert isn't going to change that".

Finally, say "stopping now will save cycle fund money which can actually be used to make cycling in Scotland safer for pedestrians."

Because if you don't: you will just dig a deeper hole for yourself and your paymasters. The more bollocks you put out, the more of a reaction you will get from the cycling campaigners. Eventually those organisations naive enough to sign up: CTC, Sustrans, will drop put -and the publicity from that will mean Keith's spin doctor will be on the phone to you swearing  like Malcom Tucker, blaming you for the press disaster.

Stop now and tell the politicians that Franklin's approach is exactly what left Scotland in the condition it is in: a nation where most sit in traffic jams on their way to coronary heat disease  sounding their horn whenever one of the few cyclist does what Franklin says and gets in their fucking way.

Posted by People's Cycling Front of South Gloucestershire at 07:00 7 comments: