The complaint that we have made slanderous claims about the forthcoming new cycle path that almost-but-not-quite joins up with the UWE-Lockeaze path have led to a new web site being created: The South Gloucestershire Cycling Front . That's good, though not quite in keeping with the Monty Python Theme. Please, go watch the Life of Brian again and add popular or people's to the title somewhere.
It appears that this site was put up by the person David/Frank who was upset about our coverage of the new cycle path. In the identity "Frank Spencer" - a tribute to the 1970s comedian who was not involved with the Monty Python group (again, pity: Brian would have been a funnier fake name. Or Bwian :), we are denounced by these people who do not want our vision "Bike Paths the Dutch don't laugh at" realised 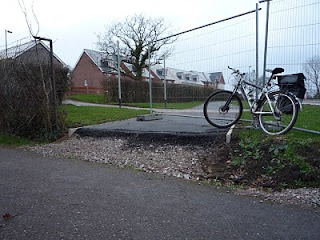 Here are some answers to their questions

Is the South Gloucestershire Cycling Front run by a failed engineer?
-No, we are a group of users who are fed up with the mediocre routes we have. They are there, they could work, but not the way they are going. You get something without lights, bollards and pillars are being added and every that path abandons you at roundabouts. And there are so many roundabouts here.

Why does this idiot think he can do better than everyone else.
We have been abroad, we know what can be done, we recognise failures. Anywhere you have to get off and walk is a failure. Anywhere you can't have kids ride around on their own is a failure. Anywhere that poeple don't feel is safe to walk or cycle at night is a failure. Any path that can have vans belonging to S Gloucs council parked in all day with nobody capable of dealing with the complaint about the path being blocked is a failure. Therefore we find the accusation that we are failed engineers from someone who appears to be partly involved in the process very amusing.


Why will South Gloucestershire Council not employ this idiot.
We do not seek employment, the team are all in paid employment in or residents of the area. We merely demand that the council delivers on their half of the cycling city promise. A city safe and pleasant to cycle around in. Bristol is improving. Filton, Patchway, Frenchay, well, try it and see what you think. 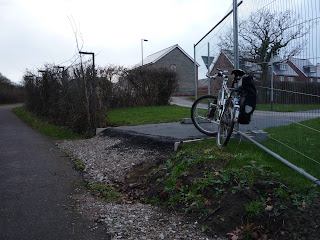 They have let us down. This is a shame as they have the space to do wide cycle paths, they have the congestion at peak hours to justify it, and they have the city of Bristol nearby for people to commute to and from, as well as the suburbs of Bradley Stoke and Emerson's Green.
Why are they failing us? Three options spring to mind, "the three I's"
Ignorance: they don't ride bicycles themselves, they don't understand our needs. They think that large dropoffs are viable, street lights are a luxury.

Incompetence: they mean well, but something goes wrong. For example, someone could not have done a proper site survey above, included the area out the site, and nobody thought while the lovely tarmac was being laid perfectly smooth that the underlying goal was being missed. Or they think that signs will help, missing the detail that one in the middle of a path on the apex of a turn would be near-lethal. We suspect "Frank" is upset about our hints about this and is taking it personally.

Indifference: they don't really care. They assume the people on bicycles are either law-breaking criminals who don't pay road tax or stop at lights, or student underpeople from outside. Not proper revenue-earning citizens of S Gloucs. They expect us to be grateful for whatever they throw in our direction. Whereas in fact many of us work at the big technology and finance companies along here and are fed up of the treatment we receive.

Indifference is probably is the underlying root cause -except it does not (just) lie in the people doing the paths. The blame lies with the councillors. Sometimes the people on the ground are just following the orders from above, and either they aren't in a position to say "this doesn't make sense" or if they do say it, they get overruled.

We shall cover the councillor problem when we focus on Old Filton Road. We know who to blame there as they appear in the local papers, proud of what they have achieved.

It has been quite amusing reading all the comments. Now we understand why Freewheeler of Waltham Forest fame disables comments on that site -it'd be full of hate mail from every single member of the Waltham Forest council whose nominal job description involved cycle paths, transport, cycle parking, street cleaning or improving the shopping areas.

PS, Frank. The photo at the top of this page is the first one in our sequence, dated 17:06 on Feb 16. The barrier is shown as it was discovered. That was the same day that some people dug a trench in the path by the UWE entrance and then filled it in with loose gravel but didn't add tarmac. Like we say: the paths are getting worse.
Posted by People's Cycling Front of South Gloucestershire at 14:01