Cycle paths that don't end in the middle of nowhere

One thing the Netherlands has is bike paths that go all the way to the city centre, and which start in the suburbs, so you can get all the way in to town and back again safely. In Bristol, the Railway Path fulfils this for one part of the city, even though it abandons you in the centre, and getting to it can be hazardous.

Is it so much to ask for this path to get to anywhere useful, rather than just have it stop when it gets complicated? 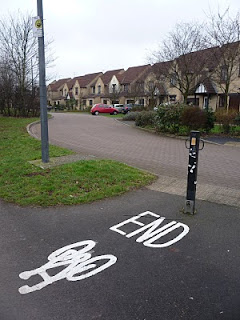 This "End" sign is so woefully bleak. It says "you are on your own from here". The idea of having anywhere to cycle other than alongside the A4174 ring-road doesn't seem to have occurred to these cycle path designers.

What can we do here? It's not obvious. Painting cycle paths on the quiet suburban roads would be a start, even better: putting in cycle paths when such suburban sprawl goes in. Though as we've seen, they are making such a mess of that in their latest project we don't believe the existing cycling team or Redrow should be permitted to do so.
Posted by People's Cycling Front of South Gloucestershire at 21:16