Our claim that the new cycle paths going up between Lockleaze and UWE are something that The Dutch would laugh at are disputed by "david", who says that we have made untrue accusations about an unfinished path, and that we should take our posting down.

To the author of this blog page you have made accusations and assumptions which are incorrect.

Well, reviewing the statements we made, the one that is probably wrong is that this is the work of the S Gloucs cycling team. Having visited the site in the week, this is still Redrow's area, and hence their problems. Please can the S Gloucs team accept our apology for this, which may reduce their reaction to next week's coverage on signs in the middle of other paths.
What cannot be untrue is 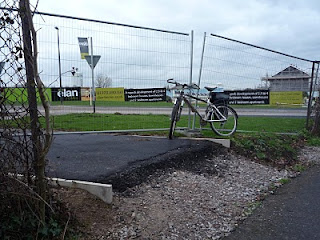 Now, it is still a building site, and it may be that there is a plan to connect the two paths together. But the fact they are on different levels means that whatever junction is done here is fundamentally broken. You will have people descending at speed down to the path where they are meant to give way, and people who are trying to get up from the UWE/Lockleaze path who won't be able to do it as the gradient to climb 50cm vertical in 1.5m horizontal is 1 in 3.

David, if you are involved in this project and have plans to fix this situation, please place them up online, point to them in a comment and we will link to them.

In particular, we would value an explanation of how you intend to address the 50cm height difference between the two paths in a way that results in a junction which is actually usable. We shall be testing whether or not the design is something Dutch people would laugh at by asking them, as well as organising a mountain bike only competition to see who can get up and down here once you consider it "open" to the public.

We can be contacted via twitter, @cyclingfront. All communications may be republished and must not be considered confidential or in any way private.
Posted by People's Cycling Front of South Gloucestershire at 17:40