We looked at the signs in the middle of the bike path last week. Is that sign a one off?No, someone seems to have decided they can put them up directly after the hard zig-zag turns that were designed by someone who doesn't understand how people walk or cycle. 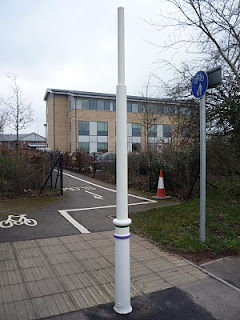 This path comes out of an industrial estate, only used by commuters. Regulars. So why  bother putting up a sign right in the middle of the path to remind them where their turn off to work is? 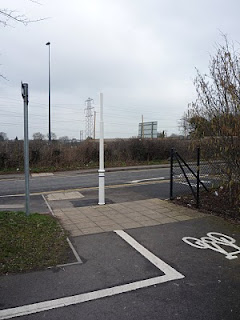 Again, painting something on the floor will work. That's why they do it on roads. But no, whoever has a bollard fetish -and is clearly a fetish- decided a triple-height bollard would do here.

This is painfully bad path design.

Is there hope. Well, the "old school" cycle campaigners have been emailing the council, here is the response they got 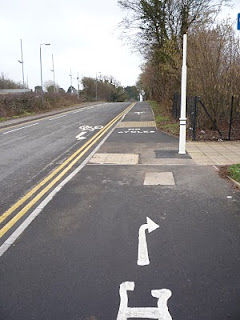 A reply to Terry Miller’s comments was sent by Keith Marsh last month, (attached), which outlines the situation regarding the ‘origins’ of the bollards near the MoD.  As for the larger direction sign posts, one or two of these have been repositioned where absolutely unavoidable.  In other cases, reflective tape has been applied to the recessed collar to make them more visible in dark conditions.

I’m sure you appreciate the number of considerations that go into determining the final position of these posts – the sign arms obviously need to be clearly visible from different directions and they should not protrude less than 450mm from a live carriageway, (for example).  Safety is also a prime consideration and the vast majority of all the recently erected sign posts and bollards create no additional hazard to cyclists or pedestrians whatsoever.

Where there are safety concerns raised regarding these features they will be investigated and rectified where appropriate.  This has already happened in some cases and as the Stage 3 Safety Audits for all the Cycling City routes take place, (the first ones will take place very soon), there may be cause to investigate one or two more specific locations.  In the meantime, construction works, including completion of often quite minor outstanding items, is still continuing on the Cycling City routes.  When this is finished and the safety audits also completed there will another opportunity to review some aspects of the route design, including the bollard / sign positions.

It would be premature to assume that all the current positions of all bollards and signs will not change.  At present the construction works are still being completed – when this is finished a further assessment of the routes will be carried out.  Any of the bollards or signs that might appear to compromise safety to an unacceptable degree may be removed or relocated.  I am sorry that this process has not already been completed – there are other works still being completed which have arguably greater potential safety implications in the short term.

I hope this is helpful.

See that? "Premature to assume that all the current positions of all bollards and signs will not change". Why on earth were they put in the middle of the path in the first place? What person though it was a good idea, and has this person been escorted out of the council offices by site security yet? Because until they have, we have no confidence that such things won't stay there -to change them would be to acknowledge mistakes, and nobody likes to do that.

What can we do here?

We propose
Other ideas are welcome. Remember, proposing acts of violence against the council staff is a no-no. That doesn't solve problems, merely polarises opinions. We plan to use the white light of publicity and rely on ridicule and the fact that whenever anyone from the S Gloucs cycling team goes to any meeting with other councils, people will snicker and ask about signs in the middle of paths. Our big concern is this: they won't care.

Incidentally, this path joins Old Filton Road. That's the road that was closed to cars until a local councillor campaigned to have a rat-run reopened so he wouldn't have to spend so much time on the ring road. Presumably, that was done with cycle city funding. This is why the People's Cycling Front of South Gloucestershire is opposed to the council team getting any more funding from central government. We need a new team, or at least new councillors, before any new money can be justified.
Posted by People's Cycling Front of South Gloucestershire at 19:17