The A4174 ring road path. You can get from here to the Bristol-Bath railway path and hence into the city centre of either city without a single road or even vehicle turning over you. Lovely.

So, the Cycling Team thought "let's put a sign in at this three way junction to help people find the way". All well and good. But the plan, as Blackadder would say, had one small flaw. The team are incompetent idiots. 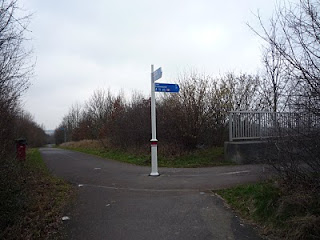 But why oh why did these idiots think that the middle of the path was the right place to put it. You do not get street signs in the middle of roads for an obvious reason: people would run into them and sue the council. So what was going on in anyone's head when they came up with this plan?

Presumably they expect everyone to cycle in one lane or other. but there's a flaw here. 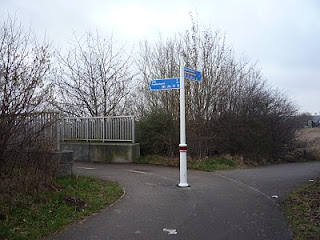 Its on a corner. And bicycles, when they corner, tilt. So now you have a sign right on the apex of the corner where you are going to smack straight into it. if you get injured, you can be sure that in the coverage of the miserable bog roll that pretends to be the local press but is really a mouthpiece of the daily mail, the usual idiot commenters will say "did they have a helmet", missing the fact you don't need a helmet on what could be a traffic free route from S Gloucs to the two closest cities if it was not for the cycle path planners putting up fucking signposts in the middle of blind corners.

Also: notice how there's no hi viz or reflective markings at the height that bike lights will catch 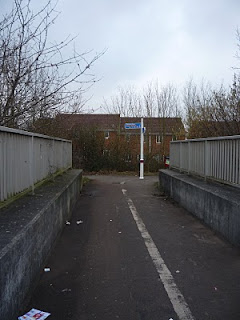 What can we do about this?

We'd like the entire traffic planning team fired, as we've stated before, the cycle forums replaced by something where the new cycle team will actually come out on rides with the local cyclists. We'd also like whichever councillor claims to be the voice of cycling in the council to spend some time trying to get round their area by bicycle.  Which raises another point: why don't any councillors have to act as special representatives of motorists? Because everyone drives up and down the A4174 ring road, the road underneath this bridge -there's no need for a special representative, all the councillors will complain about the High Occupancy lane being under used, of the ratruns being closed off. So every councillor in the council is really a special representative of the motorists.

AReturning to the ring-road, nobody stuck in its morning or evening traffic jam is going to see this sign. They won't think "oh look a cycle path, I'd be better off there". So it's not going to encourage anyone at all to cycle. For that you'd need to stop spending millions of pounds widening the road and instead put some signs up saying "If you were on a bicycle, you'd be there by now". Cheaper, more useful.

If you wanted to show people already on the path how to get to Filton, Emerson's green or the railway path, why not just paint it on the pavement? Really? It's not hard, not expensive. If you use the right paint, not even slippery. Instead we get this piece of shite civil engineering going up in winter -you know, when it's dark during commuting hours- for what. Not the commuters, it must be the leisure cyclists. But nobody cycles alongside the ring for fun. Because it's got signs in the middle of and you could get hurt.

This is why we are not some spoof organisation, despite rumours. Someone needs to make it clear to the council that they are making a mess of things.
Posted by People's Cycling Front of South Gloucestershire at 19:13