Will parking revitalise the A38? Part 1: filton

Mary Portas supports Eric "end the war on motorists" Pickles proposal to stop drivers parking  illegally for 10 minutes "to pop into a shop" from being ticketed.

Let's consider the implementation details of that


No doubt Pickle's didn't think that through when he did his populist speech.

Let's turn instead to something else: the claim that this will benefit the high street.

Filton Road on the A38. This is the border between Bristol -behind the camera- and SGloucs. 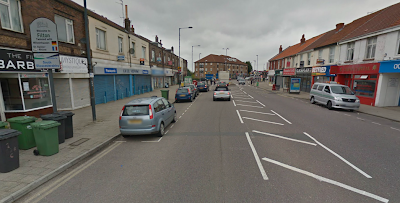 There's some parking, but perhaps they can't deal with a giant influx of shoppers.

Maybe it's the lack of parking at peak times that has shut down a lot of the shops here. The lack of traffic hints the drive-by was on a sunday, but the carpet shop is open, unlike the abandoned "uniform centre"

The wide pavements are begging for people to walk on them -and if not, why not turn it into parking? Why not let people park on the zebra crossing and let them nip in to the shops here -so revitalise a high street clearly on its last legs.

Here's why not: turn round and there's a giant parking area for shoppers.

It's even highlighted as you approach, "Shoppers Car Park"

It is fucking obvious that having enough parking spaces for tens of cars, along with short-stay parking right outside the shops doesn't magically bring some mediocre high street back to life?

And why is this high street so mediocre? Because its so painfully car centric that it only welcomes people in a car -and once you get in one, you may as well drive all the way on to the ring road instead of shopping in such a run down street.

Encouraging people to park simply discourages people from walking to the shops -and once in a car, they can shop where they want.

#FAIL
Posted by People's Cycling Front of South Gloucestershire at 21:50

Email ThisBlogThis!Share to TwitterShare to FacebookShare to Pinterest
Labels: A38, filton, sglocs