Right to Drive vs Right to Live


Ignoring the -excellent- news from London, something bleaker from scotland:


"A 94-YEAR-OLD woman driver yesterday denied causing the death of a cyclist.

Alice Ross is alleged to have driven on to the wrong side of a road, mounted a verge, drove along a pavement and hit a couple who were holidaying in Scotland to celebrate their first wedding anniversary."


This could be where automated cars could help -though they may increase pressure for 94 year olds to drive.

"Ross has a special defence of automatism. She claims she was unconscious after a medical condition caused her to faint."

The "medical condition" defence comes up again and again -invariably after someone gets killed.

What happens then? Do you think they go to their doctor and say "doctor, I was in a crash and don't remember what happened? Am I safe to drive? ". Or do they say nothing, and keep driving.

The DVLA should know things like the frequency of license returns, how it varies with the country and the demographics, and could help identify groups who appear to be underreporting their problems. 94 year-olds seem to be one: why is someone that old allowed to drive a weapon that can kill anyone else on the streets? Since the age of 70, she will have been required to self-declare her fitness to drive every three years. If the GP records could be examined, and she has been found to have lied on that form, does that make her guilty of dangerous driving?

And what about the GP -in this case or any other?  The DVLA has guidelines on their responsibilities.

"If you do not manage to persuade the patient to stop driving, or you discover that they are continuing to drive against your advice, you should contact the DVLA immediately and disclose any relevant medical information, in confidence, to the medical adviser."

This means: medical confidentiality rules can be broken if the patient is not considered safe to drive -yet is continuing to do so.

For anyone -anyone at all- to use the medical defence, their medical history should be disclosed to an independent medical reviewer, and if found that they had symptoms which prevented them from driving, then the defence should not be allowed -maybe even amplified. If you drive after being told you have a medical condition that should stop you, then you are automatically a dangerous driver.

What about the GP? They have a conflict of interest here. Do they be nice to the patient they have got to know, or do they represent the needs of the rest of society. The number of "the fainting condition", "my fear of wasps" excuses that crop up is something that needs to be raised here.

All it takes is a letter from the GP and they could have their license removed.

If that doesn't happen, then both the patient and the GP are responsible for loss of lives in our streets.

Of course, that assumes the patient really does have the condition, not some lawyer using it as an excuse.

But even there -if the lawyer does get them off, that driver needs to have their license removed until it can be demonstrated that they are safe to drive. That's better than a normal "6 month suspended license"  punishment, as this says "until we are convinced that your mysterious appeared-without-warnings condition isn't going to come back, no car for you". Somehow we need to make sure that happens. 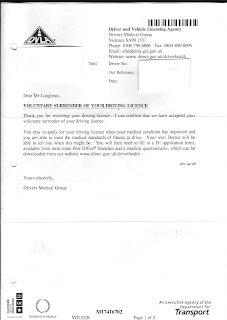 Even so, that free bus permit does help people adapt to not being able to drive, to have a car sitting there saying "drive me, drive me" . Which brings up an idea: why not make everyone whose license is suspended to automatically pay for a local bus pass for the first year of their suspension? Once you've spent it, you may as well get on the bus, rather than lie to yourself and say "I have no choice but to drive", which is what we get today.

Posted by People's Cycling Front of South Gloucestershire at 16:22