Part 1 of this series looked at Filton Road. Now lets take the streetview camera across Bristol to another part of the same road, the A38. This time, Bedminster.

You can't actually get into North Street unless you are a delivery van or bus -here are some of the outside views.

From this side street, a building to let. In the distance, a check cash and loan shop.

From the western end, budget booze appears to be suffering, it has some polish shop signs above it, and another "to let" sign 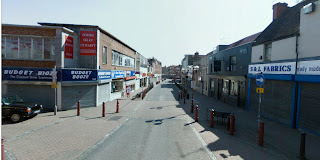 Getting into the through traffic bit, it's not any more welcoming. There's a pawnbrokers to the right. Further up the road is the S. Bristol branch of Motaman -the other one being on Filton road (RHS of the final photo in part 1)

Bedminster has been chosen for this part of the A38 overview for a key reason: it's a Mary Portas Pilot Town! Its run-downness -1 in 5 shops- is clearly obvious, the fact that the open shops -cash converters, pawn shops, check cashers show that the people who do come there have little or no money to spend, and aren't the people going to revitalise it.

Bedminster is trying to improve itself. Even Mary Portas herself, insightful expert in rebuilding high streets, has visited it.


Did she say "legalise illegal parking" here? Even she wasn't that stupid.

Behind that, a vast space of extra parking

And at the North end of North street (carrying on forwards past Motaman), there's the giant asda supermarket -with an even bigger car park.

The one thing Bedminster doesn't suffer from is a lack of parking.

It suffers from
Mary has her work cut out here, and we wish her well. Yet Bedminster proves something important

You can add hundreds of parking spaces to a run down high street and it will make no difference whatsoever.

Whatever they are going to do for the town, it won't be extra parking. At least it shouldn't be. Its inevitable that someone will be blaming the pedestrian only area for loss of trade, demanding it is reopened to ten-minute shoppers, but let's be ruthless here: it has done nothing for those bits of the street that are open to two-way motor traffic.

Posted by People's Cycling Front of South Gloucestershire at 22:24

Email ThisBlogThis!Share to TwitterShare to FacebookShare to Pinterest
Labels: A38, bristol