Two tunnels: not just a leisure route, a network

Yesterday was the opening of the the Two Tunnels route -a wonderful example of what local campaigners can do with funding -here from the Lottery and local fundraising- and engineering assistance -credit due to Sustrans. 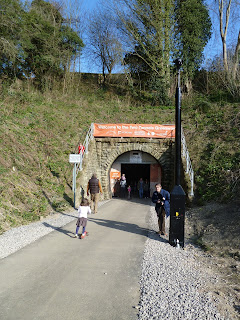 The opening event wasn't just a celebration of their work, or a get-together of regular cyclists on the first warm Saturday of the year, it was a chance for the whole community at the Bath end of the path to come out an celebrate it. 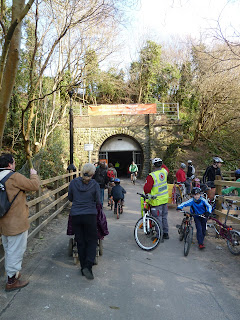 Which they did. There may have been a lot of cyclists, but there were people on foot, kids on scooters; babies in pushchairs, the elderly. People you never see coming out to celebrate some new red or blue paint on a road.

The path? Long, better lit than the shorter tunnel in the Bristol path. Going along the tunnel becomes an expedition in itself, especially for people on foot and kids on scooter 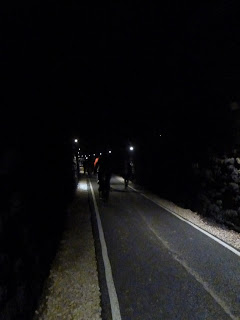 Low beam lights and reflective strips along a quality tarmac. 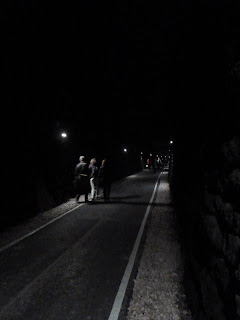 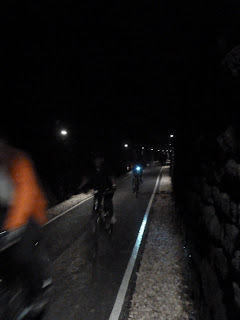 It's touted as a recreational route, but unlike many of the Sustrans-built tourist routes, this goes to near the centre of Bath, and finally makes commuting by bicycle from south of the city possible. Until now there was the rat-run roads over Coombe Down (suffering for the fit), or the A36 (scary for all). Now residents south of Coombe Down have the option of cycling in on a nearly flat route -a route that doesn't even get you that wet.

But it is also a leisure route and not an isolated "drive to the start one". You can get on to it from Bath, and are soon out in countryside which is very wild. From the end of the tunnels, you are at the start of The Colliers Way -which can get to Midsomer Norton and then Frome on mostly traffic-free routes. 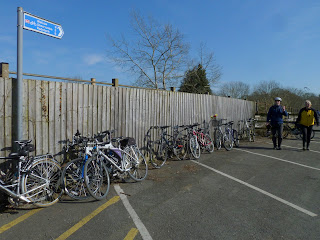 unlike the broken-up Muller Road to Abbey Wood road, the locals came out to celebrate it. Nobody from Lockleaze came out to hold a party for the opening up of the rugby ground crossing -they just got the council to block off cycle access to their shared space.

This shows why getting local involvement is critical -you will only get routes maintained and defended if the residents want it. Having something that is a leisure route at weekends as much as a commuter run on weekdays does this. Getting locals to use it for shopping and school runs works too; inner railway path has the edge here, with Fishponds Morrison and Bristol Academy by the path. 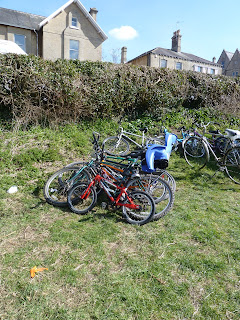 The opening day was heaving: queues for the tunnel so long many gave up, queues for food, for beer, for the bike doctor. There were so many kids bikes there, Islabike should have had a stall servicing their customers and finding new ones.

The commuters, today's cyclists, obvious in the hi-viz and helmet; lots of people in other bike stuff too -from 20+ miles in all directions. Yet these were a minority, compared to people in everyday clothes, people on foot. Even the People's Cycling Front of S Gloucs active members took their balaclavas off, the weather was so warm.

A key contribution of the engineering work wasn't just fixing up the tunnels, it was linking them upwith the city. Before the two tunnels path was isolated from inner bath by bridges that were cut off in the 1970s, "the dark ages".

The road crossings have been addressed by bridges, not "fend for yourself" junctions with "cyclists dismount" there more as a liability disclaimer for the traffic planners than a safety solution. 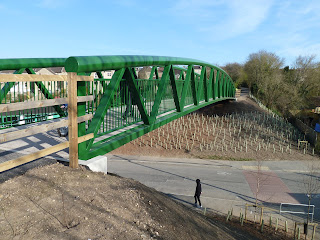 This is how main roads need to be addressed by. Not crossings that take ten minutes to cross, with pig-pens that don't have room for a family with a trailer and an impatient nine-year-old. Here a parent could let their offspring cycle ahead and have nothing to fear.

Of course, not everyone was happy; the BBC and thisisbath managed to find some people to complain about it, here about the loss of trees:


Peter Valentine, another nearby resident, added he thought the bridges were "unnecessary" because people could just walk across the road

The trees have been replanted and will grow back, hopefully the haters will have come out to the opening, enjoyed themselves, and will soon forget they ever thought it was a bad idea.

There's something else about this route, something not picked up on. It may be a leisure route, but it is slowly part of a network that is joining up the Avon/Somerset area. 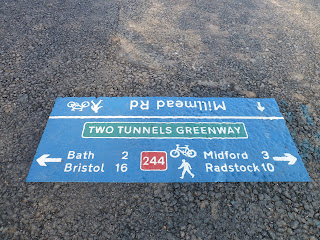 At the end of the path, it's not that much of a meander -and a crossing of the A4 main road- and you are on the Bristol-Bath Railway Path. From there: Bristol -traffic free to the end of the path. Soon: Yate, traffic free. Today: A4174 as far as the M32 roundabout before you get abandoned with a "cyclists dismount sign".

This is something other cities can only dream of. These are routes that address (some of) the suburbs, provide safe routes out of the city and leisure routes you can set off from your house on.

There's one flaw: they all peter out at the inner cities. These are the bits that Sustrans can't fix, where councils take over. They need to step up here. Why is it that you can cycle from East Bristol to West Bath traffic free; from Midford to South Bath, traffic free, yet the final mile or two from each path to the city centre is just a collection of unsigned zig-zags through back roads and dismount points?
Posted by People's Cycling Front of South Gloucestershire at 15:34