the sign says "Cycle Lockers for Long Term Users", and adds a phone number for a key.
What a great idea -you could cycle to the station, do a day trip to London, pick up a Boris bike and then head home, knowing your bike will still be there. A way to travel across the city without creating congestion. 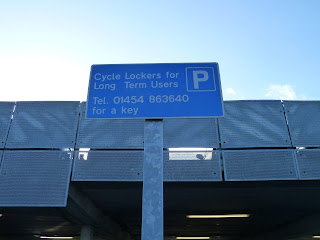 only the lockers aren't there. 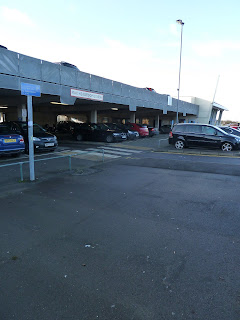 They were there, then they got removed so First Great Western, holders of the train franchise (and a sister company of First Bus), could add some extra premium parking. That didn't come about, but nor did the plans to reinstitute the lockers somewhere else. 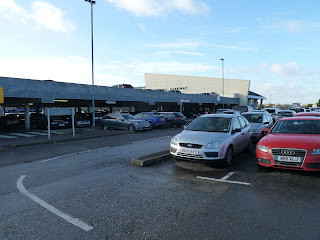 Lots and lots of car parking. The RAC Foundation are claiming that parking is the main revenue stream for railways. Presumably they are complaining about how much it costs -certainly those charges aren't suppressing demand -the car park is full on this weekday. A more sophisticated claim would be "FGW not only charges a lot for parking, it does nothing to enable or encourage you to come by any other means. That means FirstBus buses are never co-ordinated with the trains, and they take away the secure parking

What's left? A row of wheelbenders right in front of the station. Full to capacity, despite their notorious insecurity. These aren't leftovers from the 1980s either -this revamped station building is probably less than a decade old. 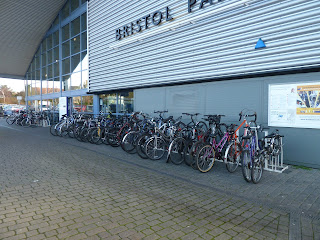 Alongside this new station building: a two-level bike park that works if your bike is light and you are strong. Dutch style bikes? not a fucking chance, even for a fit adult male. If you want a dutch-style cycling revolution, you have to provide destinations as well as routes. First Great Western absolutely fail to do this at Parkway. They do at Templemeads -it's problem is popularity, but they don't at Paddington, but they go out of their way to make parking a bike at Bristol Parkway insecure and hard, even to the extent of removing the only good bike lockers they had in order to get mor car parking in.

S Gloucs can't get the blame here -but it's interesting to consider what influence they have over the station. Can they require them to add more -decent- bike parks, to replace the wheelbenders with rows of sheffield racks, to return the secure racks, and to turn some of the car bays into bike bays.

Because forcing FGW to do it is the only way it is going to happen.
Posted by People's Cycling Front of South Gloucestershire at 21:00