How the S Gloucs transport planning has let down everyone

Here are some photos from September, A4174 between UWE and the M32 -M32 is behind the camera, the direction all the cars are going

or would be going if any of the cars were moving. 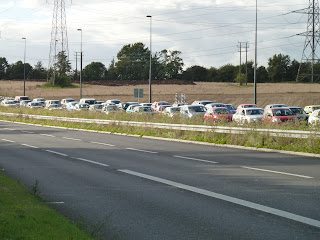 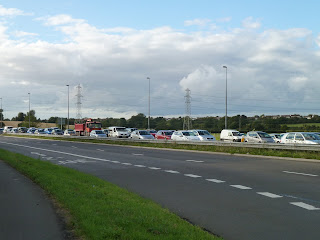 In both directions: people are sitting in their cars, getting frustrated, no doubt complaining that not enough is being done to prevent jams. 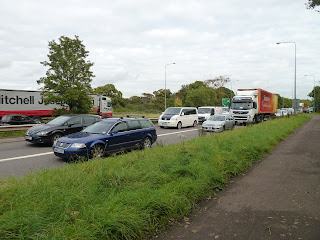 Yet if you look, what is happening here is that too much has been done over 30-40 years to create traffic jams. 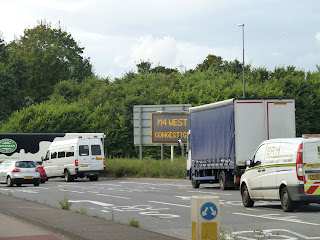 The North Fringe offices: apart from the students, you are all expected to drive.

The housing estates of Emerson's Green, Bradley Stoke, etc? You are expected to drive out of there to whereever you are going, and back again.

By creating a featureless sprawl of ring roads, roundabouts, dual carriageways gluing together dormitary housing estates and bracknell-class offices, the area is probably the most car dependent part of the city.

Which is where things failed: no serious attempt has been -or is being made- to change this. The cycle plans get the leftovers, when the traffic planners remember to even think of them. Instead the work goes into the big things, the bypasses, the "managed motorway", the roundabout improvments.

And what do people get for that? They get raised expectations, and, when congestion occurs anywhere within the road network, traffic jams that hold up more people.

On spreadsheets, the planners can look at the number of people held up, use a cost model that says "a minute for a car driver costs X pence", multiply it by the number of people waiting, and use the growth in traffic jams -the mistakes of the previous projects- to justify the next one.

What is never done is look at the entire expenditure over 30+ years and say "was it worth it?"

Because in S Gloucs, all it's done is create traffic jams to dormitory towns, and a commuter class who come in to work in the North Fringe from as far away as Wales, Gloucester and Swindon.

And the cyclists? The very infrastructure put in to help driving has made cycling there awful. You get the cycle paths of varying quality alongside the ring road -but any approach to and from it and you have to share the roads with the motoring commuters, the chavwits of Yate sprinting to get to the A4174, the BMW-ratrunners trying to go through Winterbourne on their way to their mock-rural semi.

We get the leftovers, while the nominal victors in the traffic planning, the drivers, get nothing but traffic jams.

Posted by People's Cycling Front of South Gloucestershire at 13:33

Email ThisBlogThis!Share to TwitterShare to FacebookShare to Pinterest
Labels: A4174