Old Filton Road: this is what they give us

Old Filton Road is the road where cycling city money was wasted putting in a cycle lane "hint" on one side of the road, and a shit cycle/walk path on the other, purely so that the road could be re-opened as a rat-run, something the councillors were proud to take credit for. This is how South Gloucester council spent their part of the cycling city money, improvements which they say were "designed to improve the environment for cyclists and pedestrians". Exactly how turning a dead end road into a through route while giving a shit bit of pavement to the side for the walkers and cyclists to bicker over escapes us. 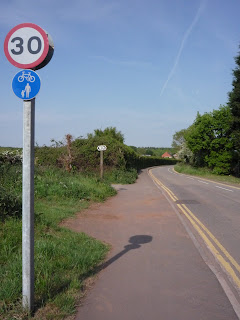 Say what you like about Bristol City Council, it didn't add something this awful and then stand up and be proud of it. Admittedly, S Gloucs council didn't either, not to the cyclists -they sold the entire scheme as "a road re-opens", with a sob story of how "drivers who had used the route were forced on to the already congested ring road instead.", missing the point that it was people choosing to drive were the problem, not the victims.

Some people are unhappy that not everyone cycles along this newly designated path. If the UKIP -the official party of the Association of British Drivers- got their way, it would be mandatory to cycle along the path. 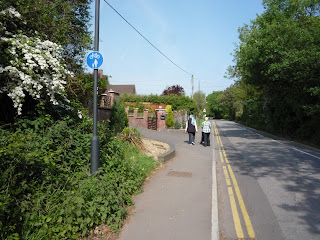 That's the path that is getting slowly overgrown after two years of utter neglect; the trees overhanging the path while the vegetation curves back in. Of course anyone in their right mind would cycle on the road, such as the person vanishing into the distance. 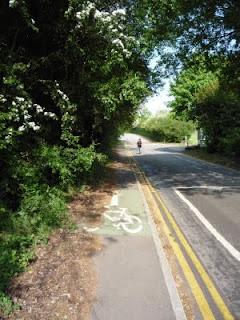 Which raises the question: what was the fucking point in spending all this money on "cycle safety" in the first place. If you are going to build something so awful that nobody will use it, then neglect it utterly, it isn't worth bothering about. 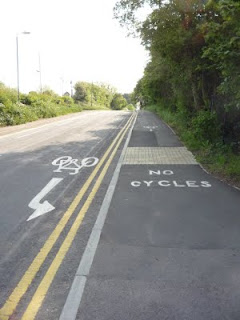 Note that to reduce the risk of head on collisions on a cycle path so shite nobody uses it, there is a big sign on the west end of the path saying "No cycles". That just about sums it up for the entire S Gloucs council cycling plans: No cycles.

Given that the bollards are missing, this photo is probably going to become the official site logo.
Posted by People's Cycling Front of South Gloucestershire at 16:52