Meanwhile, on the Lockleaze "technical" route.

Readers may ask, what's happening elsewhere, like the cycle path that ends in a 50cm dropoff.

We were informed by Rob of Really Useful Bikes that the plan was to "raise the old cycle path 50cm", so eliminating the height difference, albeit at the cost of making the climb out of UWE steeper. This would happen "in the next few weeks". We didn't bother repeating this news, pasted as a comment, adopting a wait and see strategy.

That was back in February. Since then: nothing. We'd hoped that if it had happened, it would happen during the UWE easter break. It hasn't. But then the summer term is nearly over, so maybe it will go up during the student summer holidays.

Until the paths join properly a bit of rough gravel is being used to smooth the dropoff; it's in use, though visibility is pretty bad for anyone dropping onto the UWE path.

Apart from that dropoff, what about the rest of the path? 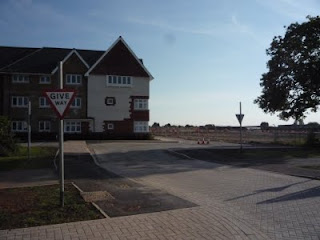 Well, that's interesting Here is another bit of the same path. You see it? Give way signs on either approach to the path. Therefore , despite the 50cm dropoff on one side and the ending on a kerb on the other, makes it the best cycle path in the whole of S Gloucestershire.

Compare to the path at the MoD roundabout. On a bicycle, you have to swerve right, sprint over a gap in traffic and get to the island -then repeat. 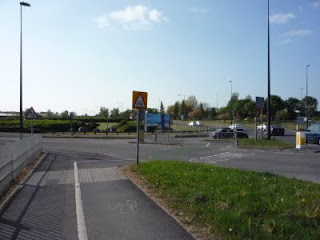 There is a sign warning cars of bicycles, but that's not a "give way", more a "look out, you may get some damage" warning, like a pothole warning sign.

That's on a roundabout where cars come off the A4174 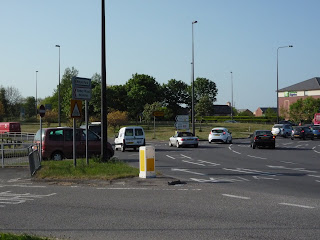 Commuters come down from Gloucester, Swindon, even further away, at motorway speeds, then will have been doing dual carriageway speeds all the way until they get here. And what does the council put in for cyclist safety on a cycling city route? A warning sign. Not a stop, sign, not a give way sign, just a warning sign.

Frank, if you can fix up the dropoff so the whole Redrow route works, you've got our recommendation as replacing the entire cycling team in S Gloucs council, though someone will need to deal with Bwian Allinson and colleagues first.
Posted by People's Cycling Front of South Gloucestershire at 07:26