In examining the work of South Gloucestershire Council and its attitude towards cyclists we’ve so far been focusing on Council Officers and their apparent ignorance, incompetence and/or indifference.

But we’re being unfair. It’s not just Council Officers who are ignorant, incompetent and/or indifferent – it’s the elected Councillors who are supposed to wield the power and have the influence it’s them that are supposed to set strategy, give direction and make decisions.

Even if the Council Officers did have a clue what they were doing, their efforts would be of no use if they didn’t have the support of elected Councillors. And they don't because the councillor is meant to care about cycling doesn't give a fuck.

When South Gloucestershire Council became part of Britain’s first Cycling City it was noted that they hadn’t appointed a ‘Cycling Champion’. Cycle Forum members (we’ll be explaining all about the “Cycle Forum” in a future blog) suggested, very strongly, that the fact there wasn’t one demonstrated that the Council wasn’t showing commitment and support.

So what exactly is a Cycling Champion? A Champion Cyclist? Not quite.

His name is Councillor Roger Symonds


"The key objective of an elected member nominated to act as a Cycling Champion will be to support and encourage the Council in its work to ensure that the promotion and encouragement of cycling as a means of transport as well as for leisure plays a central role in the development and implementation of all its policies and strategies. This will involve engagement with stakeholders and other partners both within your council and externally."

You might think it would help if that person rides a bike. In Roger’s case he does, and he recognises the problems we face.

Our immediate neighbours in Bristol have a Cycling Champion too, theirs is Dr Jon Rogers, a GP, he also rides a bike, keeps the council on track and even supports measures like community-installed bike parking: 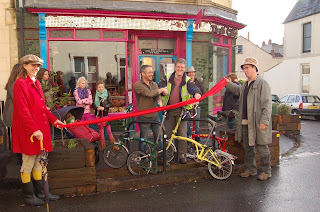 Here in South Gloucestershire our Cycling Champion is Councillor Brian Allinson. He looks a bit rounder than the other two, as if he doesn't get enough exercise. If a member of the Cyclig Front were a doctor -like Jon Rogers, they'd be suggesting a blood pressure and cholesterol test before asking if there was a history of heart disease in the family.

You’d assume that like Roger Symonds and Jon Rogers, Brian Allinson is a Councillor who happens to ride a bike and has volunteered to ‘champion’ cycling. Unfortunately, although perhaps unsurprisingly you’d be wrong. Very wrong.

Councillor Allinson doesn’t ride a bike. Cycling campaigners asked him if he owns one and he didn’t reply so we’ll assume that’s a "no" then. In fact we’ve even been left wondering if he’s ever ridden a bike.

Sure, Councillor Allinson used to turn up at events to promote the Cycling City projec.. in his car (which happens to be a large executive four wheel drive). Sure he seems supportive and says the right things in press releases, but are they his words? Or are they just written by someone from the press office who’s wants us to believe that he cares about cyclists?

Does Councillor Allison really even get cycling? How can he possibly be "a cycling champion" if he doesn’t ride a bike? In any event is he the kind of person you’d expect to be ‘championing cycling’? He doesn't believe a word of anything he says as these press events or he wouldn't look like someone about to have a heart attack in his 4x4 as gets so irate about being stuck in traffic.

Perhaps he used to ride a bike? No.

So why was he chosen as the Council’s Cycling Champion we wonder?

Oh…. we’re afraid that despite searching through the press releases and council minutes we can find no record whatsoever of Councillor Allison ever having spoken out for cyclists before he was appointed ‘Cycling Champion’. In fact he’s never even mentioned cycling.

In 2007 he was reported noting that it often takes an hour to drive 2 to 3 miles in his Stoke Gifford ward in the rush hour, half-an-hour to drive one mile! (A journey that would take 5 minutes on a bike).

You must be joking! Councillor Allison’s wanted to build another road across a railway line and at huge expense!


"We've been asking for a long time for the Stoke Gifford bypass - but it really needs now to be called the Stoke Gifford relief road. "The real problem is all the traffic from Bradley Stoke, Almondsbury and Thornbury wanting to go south, has to go through the Parkway railway bridge and it's a real pinch point. So we have to have a second crossing of that railway line which will free up the whole of Stoke Gifford."

Oh dear. The real problem, Bwian, is the failure of your council to provide any alternative transport options. As it is, that "choke point" is the only bit of traffic calming in the area.

And it get’s worse - Councillor Allison spoke out more recently against Highway’s Agency plans to signalise the slip road onto the M32 at Junction 1 – Hambrook.

Anyway, back to Councillor Allison and his view on the Highway’s Agency’s plans. Did he speak out for cyclists? Did he ask officers to look at what could be done to improve the junction for all users (not just drivers). Did he even consider other road users?

No, of course not. His main concern, in fact his only concern, was that the Highways Agency plans would cause “road chaos”. He said "I am concerned that, despite the best intentions of the Highways Agency, these plans will worsen congestion at the M32/ring road roundabout" he said, proposing adding an extra lane for traffic to queue up to get onto the motorway.

Perhaps we should give him the benefit of the doubt. Perhaps he became Cycling Champion so that he could liaise with and listen to cyclists, take their views into account?

As we mentioned above, South Glos Council hold periodic ‘Cycle Forum’ meetings and they’d provide an ideal opportunity for Councillor Allinson to meet cyclists and hear their ideas and concerns.

Apparently he went to one meeting and, yes, you guessed it, he didn’t like what he heard and has not been back since.

This has been pointed out on numerous occasions. He always sends his apologies. One meeting in September 2009 was re-arranged especially so that he could be there. He still didn’t bother to turn up.

As we said, yes Councillor Allinson does turns up at events to promote Cycling City (and get his picture taken) but what’s his motivation, does he believe the words he’s quoted as saying?

Speaking at the opening of the new cycle route between Bradley Stoke and Parkway Councillor Allinson was quoted as saying: "For those who want to start the New Year with a healthier lifestyle this route offers a great opportunity to combine a cycle ride with a trip to the gym or for a swim. For longer cycle rides the new route also offers good links to cycle paths in the Three Brooks Nature Reserve and the local area.".

Notice how in the same article Jon Rogers from Bristol says "this newest Bradley Stoke route will encourage healthy, friendly, sustainable commuting as well." It's like Jon recognised that Bwian is clueless about the needs of the cycling community and stepped in for a bit of damage limitation.

Talking about the opening of another route to the shopping mecca that is Crappy Cribbs Causeway he said "This route will make it easier for cyclists to travel to Cribbs Causeway, which is timely for that last bit of Christmas shopping."

OK we might be being picky but note he doesn’t refer to himself, he always refers to cyclists, gym users.. as if they (we) are another class of citizen. That  is, an out group, not his electorate, not the people who work in the industries of the area that bring in revenue to the city.

One of the key aims of Cycling City was to encourage non-cyclists to take up cycling. To encourage people to consider using other forms of transport other than their car.

Get those people to benefit and we all benefit. Improve their fitness and therefore health: reduce the burden on the Health Service. Get them out of their cars, reduce congestion: we and the environment all benefit -and save money on road widening.

If the words Councillor Allinson is quoted above as saying are really some PR gimlet's list of quotes for him to mouth as he tries to get his over-round face in the paper. What does he really think? Each Councillor is required to submit an annual report. The report sets out a brief description of the Councillor's main activities, what Committees they sit on, membership of Outside Bodies and achievements and successes during the year.

Councillor Allison’s report mentions traffic congestion as the number one concern raised by his ward members. He writes at length about his responsibilities and achievements over the year. Cycling does not get one mention. Not one. Well, OK, a half, a tinsey bit, near the very end of his report he mentions he officially opened a BMX track in Little Stoke Park “which has been so well supported by all the youth of Stoke Gifford” – see,again, he thinks bikes are for other people, kids (until they are old enough to get a proper form of transport).

Brian Allison doesn’t think bikes are a form of transport.

He thinks bikes are for fitness freaks

He thinks bikes are for kids, provided they dress up like bollards to cycle round a school playground