Car manufacturers: swapping one myth for another

Those photos and 30-second adverts showing a happy couple driving their open-top car along though an empty county lane, or a gritty bond-esque man  gear changing aggressively as he forces his sports car through alpine roads? Dead. The customers have realised this is bollocks -as much as those banking adverts that show a friendly bank manager at a local branch greeting you, the customer. Banks have been shown to lie about the products they sell, from mortgage types to insurance, while the fact that the "dream of the open road" turns out be "the myth of the open road" is obvious to all.

There's fuck all romantic about sitting in a motorway flyover with nothing but three lanes of traffic jam ahead of you -which is why the M4 junctions 1-3, Bristol M32 or Spaghetti Junction never show up in adverts. Cars are no longer status symbols, they are things to sit in while you suffer in traffic jams.

As the BW article says," in the U.S. and Europe, the biggest convertible markets, are opting for more pragmatic vehicles as the automobile wanes as a symbol of social status. "

VW dropping the EOS, Peugot abandoning their open-top yous/. The only people who haven't realised that the dream is dead are the Daily Mail article writers -and even there the usual haters in the comments lay into the story as being bollocks.

This is leaves the car vendors with a problem: how to sell cars. And what better than another dream? What better than admitting that your drive will be stuck in a traffic jam -but saying with our urban SUV, the fact that you spend 2 hours a day and £80 a week stuck in traffic won't matter. 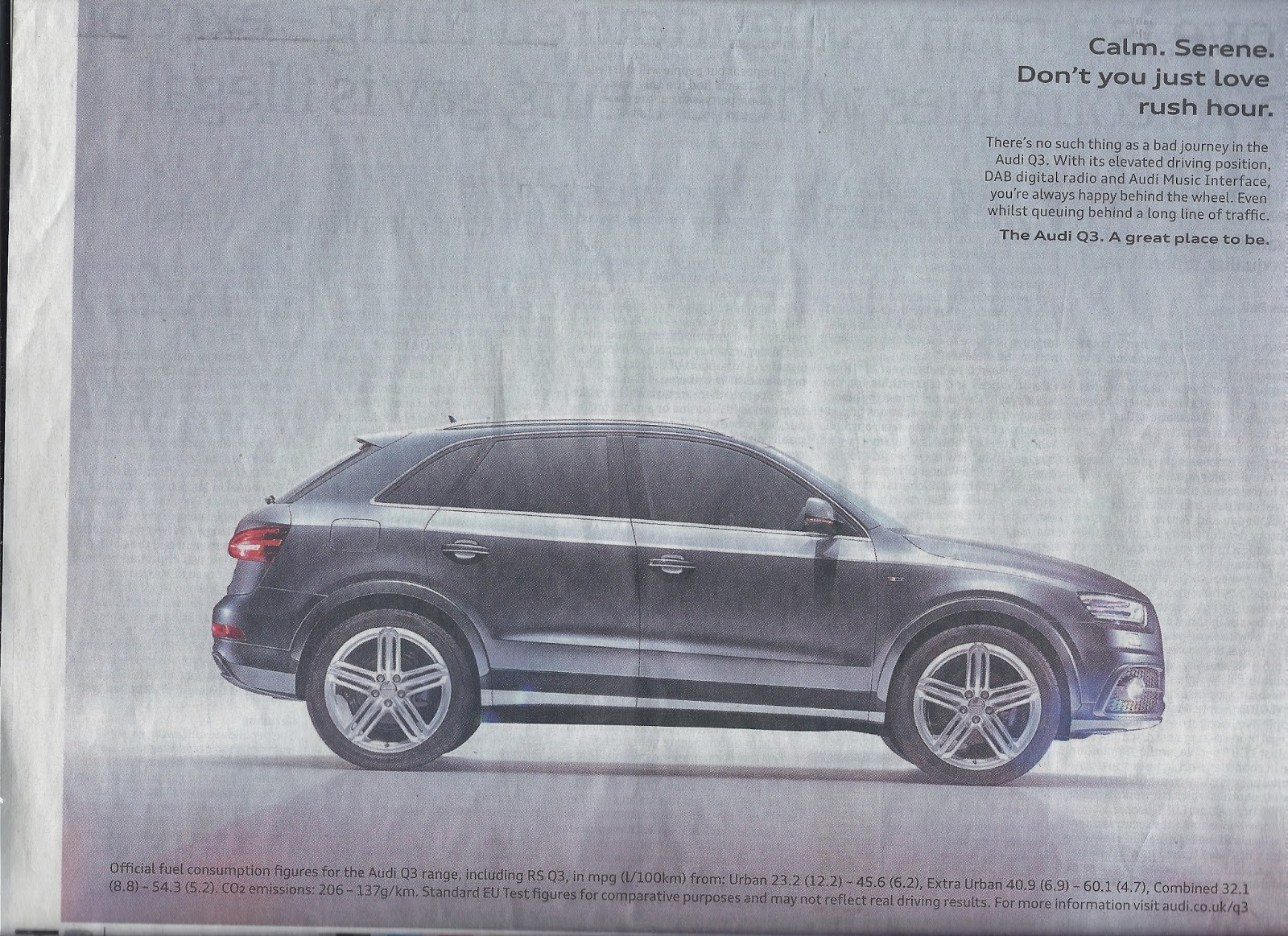 As this Audi Q3 advert claims


Calm, Serene, Don't you just love rush hour
There's no such thing as a bad journey in the Audi Q3. With its elevated driving position, DAB digital radio and Audi Music Interface, you're always happy behind the wheel. Even whilst queuing behind a long line of traffic.


This is absolute bollocks and someone should complain to the ASA about it.

Because we know what people driving Audi Q-series SUVs end up doing: driving into shops while trying to run cyclists over.

To close the advert, the copy editors say "The Audi Q3. A great place to be"

More accurate would be "The Audi Q3. Just as shit for driving around a UK city as any other car -but a better place to be than the on a bicycle just in front of the Audi"

Posted by People's Cycling Front of South Gloucestershire at 14:25