Urban SUVs -are they really that fucking useless?

Here's an advert from the weekend's guardian, a paper that is meant to be "forward thinking". It's for some kind or urban SUV

"Be the envy of the School run"

Is that all they can fucking say about it? It means "your five year old car that still works perfectly and is on its second set of tyres doesn't look like an urban SUV so you should get rid of it and lease something more expensive so that people can look at you on the school run and say "cool", although by the end of the lease we'll have changed car styles to make this thing look out of date and you will want to do the same thing again"

This shows how the car industry is running out of things to say about cars -or reasons to justify replacement. This is why they are getting heavily into autonomic vehicles -there's nothing left to be done in engines, but integrating computers gives them a lifespan of a laptop.


The scary thing: it may actually work. 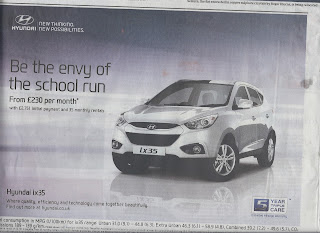 If the advertising team know their customers, they will know that their customers really do want to show off which car they drive their precious offspring to school in. They may also know that the demographics of guardian readers means they are the target audience.

Whichever fuckwit came up with this probably drove home across london in their c-zone busting urban SUV feeling so fucking smug with themselves.

If you look at the money spent on car advertising, a single weekend's spend probably comes out to more than the entire annual "marketing bicycle" budget for the councils and government. They do the little leaflets saying "why not walk your kids to school", but every paper has half-page adverts saying "you need a newer car for the school run"

Indeed,the annual advertising budget probably comes to much more than the actual infrastructure investment on cycling. Someone -Carton Reid?- could research that, as it would make a good story.

Car advertisments are the propagada arm of Imperial Car, as they repeat the same lie: get a new car and you will be happy. This is why pushing back at bollocks they say is important.

Posted by People's Cycling Front of South Gloucestershire at 10:48

Email ThisBlogThis!Share to TwitterShare to FacebookShare to Pinterest
Labels: advertising